That is the persona of many con artists, abusers, paedophiles, and killers. Ted Bundy was handsome and educated. The number of young women he raped and killed has not been determined, but it may have been more than 200.

Ted Bundy was intelligent and charming. 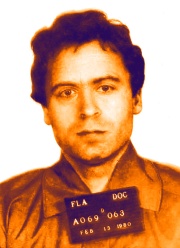 Ted Bundy’s 1968 VW Beetle. This was the car he used for most of his murders. Now on display at the National Museum of Crime & Punishment in Washington, DC (Photo credit: Wikipedia)