In the early 1800s, doctors became aware that some patients who appeared outwardly normal were lacking what we would call a conscience. They were described as morally depraved or morally insane. The term psychopath was first used around 1900, then changed to sociopath in the 1930s to emphasize the damage afflicted individuals do to society. Today, researchers have returned to using the term psychopath. 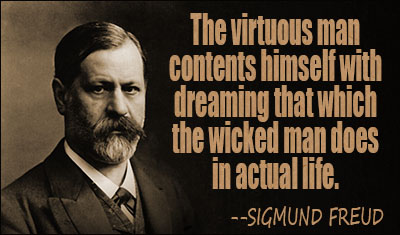 When Freud obtained his medical degree in 1881, the term psychopath had not yet been introduced.

…it is by no means the rule that virtue is rewarded and wickedness punished, but it happens often enough that the violent, the crafty, and the unprincipled seize the desirable goods of the earth for themselves while the pious go empty away. Dark, unfeeling, and unloving powers determine human destiny; the system of rewards and punishments, which, according to religion, governs the world, seems to have no existence.